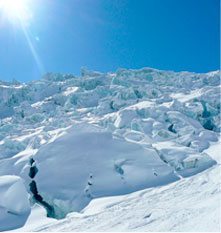 There is mounting evidence that the Arctic is today experiencing an unprecedented degree of environmental change and level of consolidation in this change – broad-scale increases in air temperature; reductions in sea ice cover; melting of glaciers; loss of permafrost; lengthened ice-free period in lake and rivers; and reductions in snow cover. From a hydrological perspective, the most indicative change involves trends in the discharge of major rivers in Siberia and North America, which deliver large amounts of freshwater to the Arctic Ocean. Recent analysis suggests ongoing redistribution of freshwater from the sub-Arctic into the high northern latitudes, which is consistent with concerns about an accelerated hydrologic cycle associated with greenhouse warming.

Research on the Arctic water cycle has traditionally focused along disciplinary lines and the need for interdisciplinary synthesis and integration of information from physical, chemical and biological systems is becoming more important. In this context the Arctic-HYDRA program represents a consortium-based international study to provide a quantitative picture of the state of pan-Arctic hydrological system. Starting during the IPY campaign, the programf will represent a critical benchmark against which to assess future change, with focus on the following key questions: